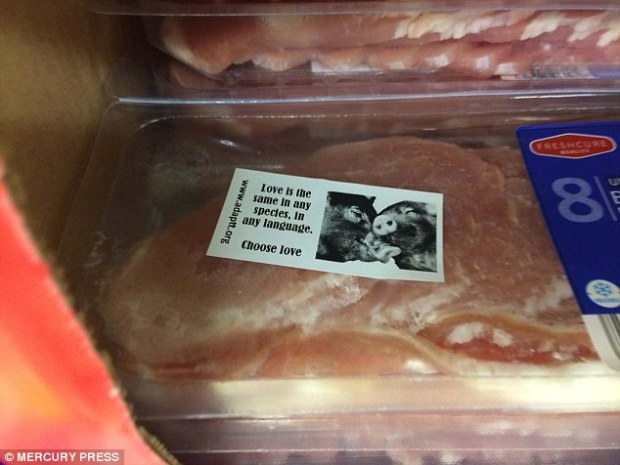 Veganism is on the up but alas, for an unknown reason some newspapers, most particularly the Daily Mail, are taking umbrage with this. The most recent headline that caught my attention was

This article, published 20th January 2017, is about a lady with a crippling condition called lipoedema, which creates an incredibly painful fatty build up in limbs. In the article it states “The cause of the condition is unknown but there is often a family history in patients.” So nothing to do with veganism. In actual fact, aside from the headline, ‘vegan’ is mentioned only one more time in the article and it is the second word in the first sentence:

In my opinion, this seems like newspapers want readers to link veganism with a debilitating disease. What do you think?

Another Daily Mail article that caught my attention was published 9th January 2017. The article documents the story of a vegan activist from Brighton, Marc Gurney. Marc (Facebook page here) had spent time putting stickers on meat items in supermarkets to create awareness for veganism. For example a sticker would read: ‘By eating me you will cause another of my kind to be killed’. Personally I found his activism quite peaceful and thought-provoking… But maybe that’s because I’m also vegan. However, the headline on the Daily Mail article was

Vegan wages war on meat-eaters by plastering supermarket shelves with graphic stickers to guilt-trip shoppers out of buying sausages, eggs and even MILK ‘because it’s Veganuary’

‘Wages war’ could be a slight exaggeration.

I understand that newspapers are in the business of making money and not saving the planet. However, it does make me wonder whether they should be held morally-accountable for their news articles. Instead of writing biased articles, should the papers have a responsibility to understand why people are vegan and then report the events with a new perspective? Nothing good comes from inciting hatred.

On the other hand, after contacting Marc, he explained to me that he was happy with what the Daily Mail had wrote. Had they not written such a biased and extreme article, he wouldn’t have received the enormous amount of publicity that he did. Instead of the article going unnoticed, it got nearly 1000 comments and shared over 3000 times. It got more people thinking about veganism than Marc could have ever imagined. It’s like Marc said

He’s right. Although the woman’s debilitating illness had nothing to do with being plant-based it still got people thinking about veganism. Maybe I should write a letter of thanks to Daily Mail…

If Daily Mail wrote a positive article about veganism then imagine the good they could do for the animals and even the planet… Until then I’m going to agree with Marc and be grateful for the negative attention, because as long as people are thinking about veganism then we’re halfway there.

9 thoughts on “What Did Vegans Ever Do to the Daily Mail?”