Horse racing is a sport for people that hate horses.

To be clearer, I love all animals and especially my dog. So I wouldn’t enter him in a race in the hope of making money from him, and then if he were injured (quite likely!) I’d get someone to shoot him in the head, as he is no longer a profitable resource. Nor would I watch a race where other dogs were exploited.

I don’t support horse racing because I love horses.

Horse haters often justify racing horses by claiming that the horses are treated with the utmost care *cough* because they want to make money from them *cough*. An example of this…

Ricky Gervais tweeted saying ‘Why would you gamble with a horse’s life for fun? #YouBetTheyDie‘. Then Ger Lyons, a horse trainer, came along on his high horse (excuse the pun) to explain what Ricky clearly wasn’t aware of… 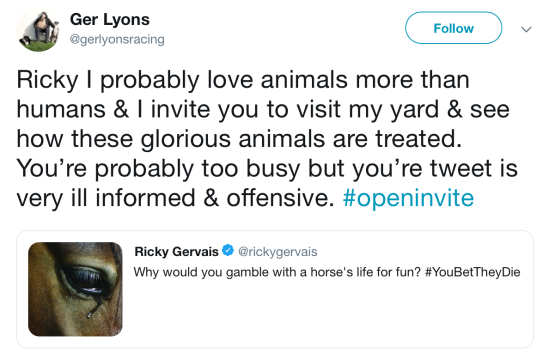 I sighed quite heavily before writing the next part.

Ger Lyons first claims to love animals more than humans. That’s a really weird thing to state as he probably eats animals, so already I would claim that he is the one that is ill-informed, not Ricky. Then on top of this, he completely ignores the reference to death in Ricky’s tweet and, instead, side-steps it by implying that the animals in his yard are treated really well, as though great treatment would justify getting shot in the head?

As my son was growing up I noticed he had a real flare for chess. So I invested lots of money and got him the best training money could buy. We would travel to different competitions and we stayed in the best hotels. Then there was an accident and he could no longer win competitions, so I lost interest and shot him in the head.

Their life is not yours to take.

To anyone that enjoys horse racing… If you’re starting to feel that maybe supporting (by watching, gambling or attending) an industry which enslaves and murders animals is not an industry you want to support anymore, there is another option. Did you know that humans race? Of their own choice. They are pretty fast too and they’re not killed if they get injured. You could just support that instead.

On a more positive note, huge thanks go to Sandy Sharkey for allowing me to use one of her beautiful photos of wild horses (as they should be) for my cover photo. I have never truly appreciated the beauty of horses until seeing her photos and I would highly recommend checking out her instagram. It will blow you away.

Lastly a big thanks to you guys for reading and if you’d like more details regarding racing horse deaths, you can find up-to-date information at www.horsedeathwatch.com.