Shenzhen, a region of China, have recently announced their ban on eating cat and dog meat.

This news has brought a lot of pleasure to a lot of people, including myself. However the resulting hypocrisy is unbearable.

I am fortunate enough to be a member of some horrible Facebook groups. Members posted about the ban and then the hypocrites emerged. Below are two examples to represent the two kind of hypocrites.

The first kind of hypocrite eats animals but will complain about the way cats and dogs are killed in China.

Is this guy advocating for cats and dogs to be killed in humane slaughterhouses?

Should we gas cats and dogs then? Or instead should we drag them through electrified water before we slit their throats? Maybe we should just shoot them in the head with a bolt gun but that doesn’t always get the job done. How would you like your cat to be killed in our humane slaughterhouse?

Our neighbour boils his children alive. What a disgusting parent. He should be like me, I kill my kids with a bolt gun because I love them. 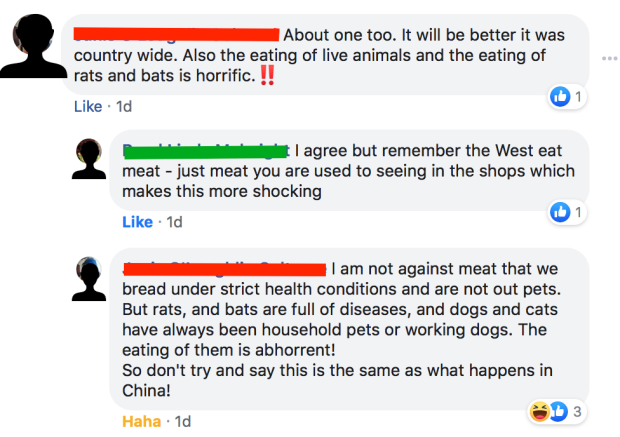 Notice humans aren’t on her save list. We’re animals too 😉

What reason could there possibly be to kill a pig and save a dog? Is it because pigs have two ears, two eyes, a nose, four legs, a tail… Oh wait, dogs do too! If eating one is ‘abhorrent’ then open your eyes and you’ll see that eating the other is abhorrent too.

No animal deserves to suffer, especially not for your appetite. So when you do applaud the banning of cat and dog eating in China, make sure that your dinner isn’t smothered in hypocrisy. It’s bitter-tasting.

Challenge your beliefs. Then go vegan 💚